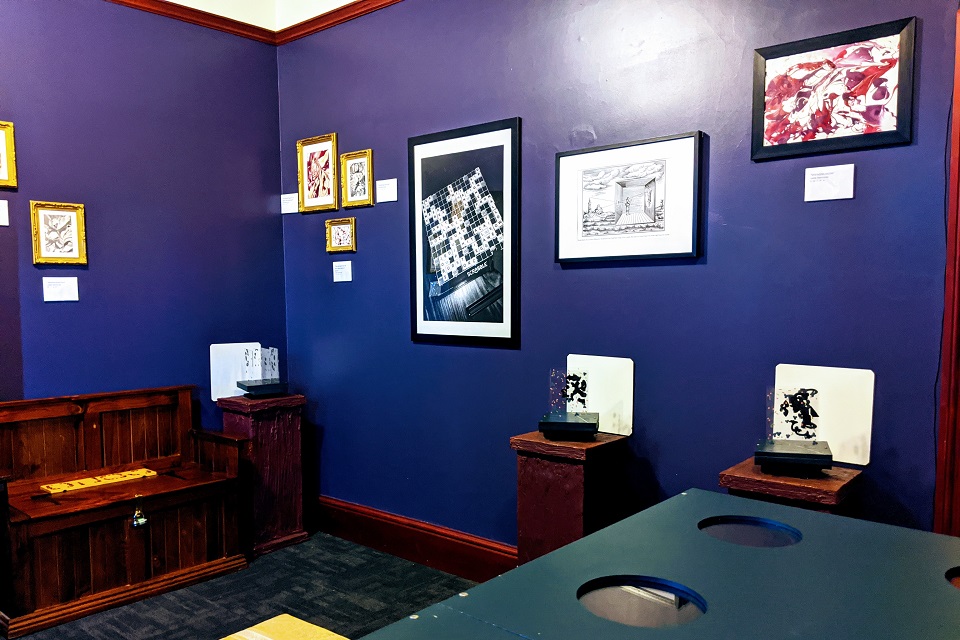 Are you the type of person who always picks the twist ending of the latest show you’ve been binging? Did you ever find yourself watching a heist movie and thinking ‘you know what, I’d be pretty good at that?’ Think you are brave enough to take on the challenge in real life? Well bring with you some wit, a good amount of problem-solving skills, and a whole bunch of friends to solve some  fun mysteries hidden behind the door!

If you’re up for some kind of adventure, you need not go anywhere but try the thrill of an escape room! And our Team’s best recommendation for that is none other than Evolo Room Escape!

From its name itself, Evolo is a Latin term that literally means ‘escape’ or ‘fly away’. Since it sounds like the very goal of the game, the power couple and passionate owners of Evolo Room Escape, Nick and Lauren, made use of this. They wanted theirs to sound different from the other existing escape rooms, hence the Latin name.

“A lot of escape rooms back then were going location-based names because they wanted to be the escape room for that location. We wanted something enduring, unique, and interesting,” explained Lauren.

To give you a little background on escape rooms, these are rooms where people are in to play a game and commonly solve a series of puzzles in a specific limited amount of time to successfully exit the room. They started in Budapest and Japan in 2007 and eventually penetrated Australia in 2011.

The launching of Hobart’s Evolo Room Escape in October 2016 was inspired by Nick and Lauren’s enthusiasm for escape rooms. They had their first-ever escape room experience in 2014 while they were on a holiday in Sydney. “That’s how it really started. We played one called ‘Vampire Castle’–that was our first room. We had no idea what we were doing but got the hang of it,” Nick shared.

Fascinated by their experience, they went back the next day to play in another room. Currently, these escape room enthusiasts have already experienced over a hundred rooms and still counting!

Prior to starting this adventure-filled venture, Nick was a Mechanical Engineer in Burnice, working on underground mining equipment. Lauren, on the other hand, was a Taxation Accountant.

Admittedly, one of the biggest challenges that the couple has experienced when they’re just introducing their business was explaining what an escape room is. While others have hesitations trying the game for the first time, Nick and Lauren constantly reminded them:

“It’s fun and it’s a social way to catch up while doing puzzles and working together.”

From a smaller reception then, the word of mouth has spread all over the community and now, people leave the escape room with a big smile (and bragging rights) on their faces.

Since their first escape room in Hobart gained a lot of love and traction, they decided to continue and spread more fun in Moonah come 2020! What they thought was a smooth genesis for their second branch experienced a glitch when the COVID pandemic began.

Nick and Lauren reckoned how they signed on a new double the size building then but they couldn’t use it for the time being because they were on a lockdown. They didn’t let the situation get the best of them, though.

Instead, they showed their creative and innovative side and introduced a completely online puzzle every week which they called Evolo’s Happy Hermits. There were no prizes for this puzzle hunt and ran with a pay-what-you-feel approach as an entry fee.

A lot of people got interested and anticipated these multiple puzzles every week, released at the same time (Wednesday, 7 PM). This gave people something fun to work on while they were in isolation. “You can do that on our website. People can catch up via Zoom or wherever they’re stuck and do it with family and friends who are also stuck in other places,” Lauren said.

Instead of ‘After Work Drinks’, the team of Evolo Room Escape came up with another workgroup idea in 2020 called ‘After Work Thinks’. From here, people can just sit around and join as a team and solve a set of puzzles, whichever time works for them. But after some rounds of it, everyone went back to the office. It was a good way to train groups, though, as it can help build and connect relationships.

Currently, Evolo Room Escape’s site in Hobart has three rooms: Secrets of the Jungle, Obscura, and Defusal. Their Moonah’s site, on the other side, consists of Diamond Heist and Space Race.

Our very own Digital Media Head, Aaron Horne, along with his friends and family, has already done and dusted the Diamond Heist last December. From his stories and description, he seemed to have lots of fun and he definitely loves the concept! He’s now looking forward to trying the newest room in Moonah which is the Space Room.

If you’re wondering who’s the main mastermind behind this impressive idea, it’s none other than Nick. As a massive puzzle fan (the traditional one), Nick works on all the technology-related stuff of Evolo Room Escape. As for the ideas, Nick and Lauren work hand in hand, as well as the overall design of the rooms–trying to make everything unique yet equally challenging.

As they shared, it takes around 6 to 12 months for a room’s completion with “plenty of arguments in-between”. That includes solid research, planning, discussion, and execution–all while wild west music is playing around the room (that’s their kind of vibe!).

When asked about how Evolo Room Escape differs from other escape rooms around Australia, Nick mentioned that theirs is more puzzle-oriented. He also highlighted how each of their rooms is distinctive.

“That’s one of the beauties of it, you don’t really know what you’re gonna get when you walk into an escape room.”

The most recent room that the team has opened is the Space Race in Moonah. This is very different to their normal rooms where you’re advancing to a story you’re working through. This feels more like a real-life board game where players are split into two teams: red and yellow. From this game, you can see the other team on the other side of the window. Yes, you read it right! You can be competitive and yell all you want.

“Different people prefer different rooms. We’re just trying to do something different each time which keeps us and our customers interested,” added Lauren.

The fun continues once you successfully escape the room! They offer a collection of games ranging from a variety of board games, escape games, and puzzles, which are being changed regularly. Here’s the punch: you can take one home with you and play in the comforts of your home.

Currently, they have space for two more escape rooms on the Moonah site. When asked about their future plans, both of them agreed to work on these. Plus, they have been throwing out ideas with each other. Anytime soon, we might just find an escape room in a van or even on an island. Those are just some of their imaginative ideas which they’re aiming to put into life soon.

Before we ended our chat with the lovely owners, Nick left a reminder to those who wish to accept the dare:

“Just go in and have fun, and don’t watch the horror movies–we don’t do that. Go with an open mind and you might like it.”

Call it the real-life Alice in Borderland or Squid Game–but obviously, without the horror part (take note of this). So, if you’re looking to fill your hour with adventures and challenges, you may book your next escape room activity via their website: https://www.evoloroomescape.com/

We won’t spam you ever, that’s promise